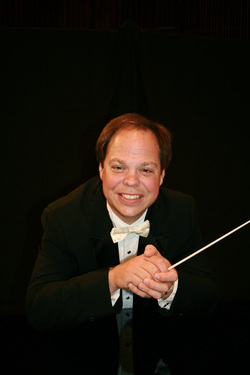 Dr. Christopher Stanichar, WASO Music Director
“It was as though he were telling a story with his hands.”
— Pravda Cevera (Russia)


"The ever-smiling and extremely animated (Stanichar) guided the Everett Symphony through a superb performance filled with wit and charm… It was the kind of charismatic interaction with the audience and orchestra that showed the brilliance of Stanichar's directorial methods."
--Mukilteo Beacon (Seattle)
Christopher Stanichar is the Music Director of Worthington Area Symphony Orchestra since it was founded in 2010.  Under his direction, the orchestra has quickly become one of Southwest Minnesota’s premiere musical organizations, giving exceptional musical opportunities to musicians of all ages, as well as bringing exciting symphonic music to hundreds of Minnesotans who attend these concerts at the newly renovated Memorial Auditorium.

In addition to WASO, Christopher is Associate Professor and Director of Orchestras at Augustana College (Sioux Falls, SD), one of the region’s top-ranked liberal arts colleges, where he conducts The Augustana Orchestra. Recognized for his excellence, he was awarded the Jane and Charles Zaloudek Faculty Research Fellowship in 2011.  He also conducts the South Dakota Symphony Youth Orchestra (through the South Dakota Symphony Orchestra) and the Northwest Iowa Symphony Orchestra.

Christopher earned his Doctorate of Musical Arts in conducting at the Cincinnati College-Conservatory of Music where he was a student of Gerhard Samuel.   He has been selectively chosen as a participant in conducting master classes with some of the finest teaching pedagogues, including Ilya Musin, Daniel Lewis, Ken Keisler, Gerard Schwartz, John Farrer, and Donald Thulean.  In 1996 he was awarded a prestigious Fulbright scholarship to study conducting in Slovakia, appearing as a guest conductor with many of the greatest orchestras in that country.  In 1997 Christopher was appointed Conducting Assistant for the Cincinnati Symphony Orchestra, where he was mentored by Maestros Jesús López-Cobos and Erich Kunzel.

Christopher is an active composer and his works have been commissioned and performed throughout the world. You may have heard his original work, Trisagion that was used in the Ric Burns’ PBS documentary, Andy Warhol.  More recent projects include a full-length cantata, St. Mark Passion, written for the 150th anniversary of Augustana College as part of a Granskou grant.  Another original composition, Variations on Theme by Handel for string orchestra is scheduled to be in the independent film, Dust of War.  TrevCo-Varner Music publishes several of his works for English horn.  This year he is writing the Tales of Hans Christian Anderson for the Hastings Symphony Orchestra in Nebraska.

In his free time, Christopher’s interests outside of music include Russian icons, foreign languages, biking, and he is an avid pinball player.  The most important thing to Christopher is his family.  He enjoys making music with his wife, Kristi, and they are blessed four wonderful children, all of whom are active in music. For more information about Christopher and a catalogue of his compositions, please visit christopherstanichar.com.

Translation: “Christopher Stanichar is …. One of the best musical conductors in Latin America.”

“… [we] were impressed with his [Stanichar’s] obvious energy, great joy directing and outright enthusiasm.”

"Stanichar brought life to the orchestra.  He seems almost like a 'Wunderkind.'  His conducting was emotional and forthright.  It was as though he were telling a story with his hands."

"The ever-smiling and extremely animated 32-year-old conductor from the University of Nebraska guided the Everett Symphony through a superb performance filled with wit and charm."

"It [The Concert] was the kind of charismatic interaction with the audience and orchestra that showed the brilliance of Stanichar's directorial methods."